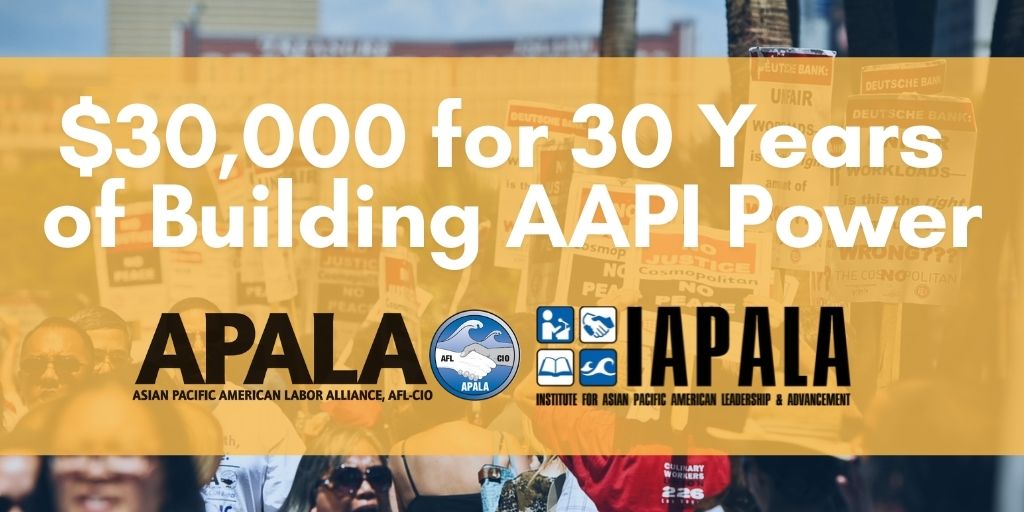 On May 1, 1992, five hundred union members from throughout the United States came together to form APALA, a breakthrough in a union movement that had historically excluded AAPI workers. APALA launched a national network of AAPI activists who have organized workers into unions, advanced labor’s political power, forged labor and community alliances, recruited the next generation of organizers and activists, promoted diversity within labor, and implemented a comprehensive agenda for economic and social justice.

Though AAPI workers have made enormous contributions to the advancement of unions and communities over the generations, their stories have seldom been recorded or heard.

The Asian Pacific American Labor Alliance, AFL-CIO (APALA) is the first and only national organization of Asian Americans and Pacific Islander (AAPI) union members and allies, building power for AAPI workers and communities. APALA is shifting the national narrative to be more inclusive of AAPI workers, communities, and issues, and prioritizing capacity building in the 22 local chapters on the ground with members in 38 states. APALA's national and local impact on advancing pro-worker and pro-immigrant legislation and building AAPI worker power comes directly from our worker and member centered approach. Since our founding in 1992, APALA has always been a space for people to connect and find community.
​
We are proud of the work our members and chapters have accomplished these past 30 years and invite you to help us raise $30,000 for this special anniversary to continue the fight for collective liberation!

​
*Donations made towards APALA's National Executive Board members fundraising pages below will be made to Asian Pacific American Labor Alliance (EIN: 52-1777961) and will not be tax deductible. If you would like to make a tax-deductible donation, APALA's sister organization, the Institute for Asian Pacific American Leadership & Advancement (EIN: 27-4284628) is a 501(c)(3) non-profit organization in accordance with IRS regulations. You can donate to IAPALA here.